Happy National Women’s History Month! To celebrate, we’re recognizing some of our awesome women in Girl Scouts who have shown that they are true go-getters, risk-takers, innovators, and leaders.

Juliette Gordon Low
First up, we’d like to pay a special tribute to the woman who started it all: Juliette Gordon Low. At the age of 51 in 1912, she sparked a worldwide Movement that would inspire all girls to be forward thinkers and make the world a better place. Juliette Gordon Low started a troop of 18 girls in her hometown of Savannah, Georgia to share what she learned abroad and provide a leadership program for girls and the Girl Scout Movement was born. Today, our organization has grown to nearly 3 million members worldwide who carry the mission of building girls of courage, confidence and character. 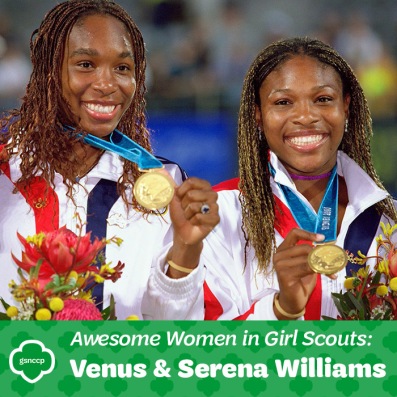 Venus and Serena Williams
These tennis stars have both been ranked by the Women’s Tennis Association at number one in both singles and doubles. They’ve also won gold medals at the Summer Olympic games showing that hard work and effort can take you anywhere you want to go!

Susan Wojcicki
Susan Wojcicki is the definition of a Girl Boss! This Girl Scout alumna is not only the CEO of YouTube, but she’s also a mother of five. As one of Google’s original employees, she played a key role in acquiring YouTube and helped pave the way to providing an stronger and more supportive working environment for working parents. How cool is that?

Dakota Fanning
This Girl Scout is not afraid to pursue her dreams! Dakota started acting as a child, and earned a nomination for a Screen Actors Guild Award at age seven for the movie I Am Sam. She’s acted in over 40 films and has even voice acted in several animated films. Way to be a go-getter!

Lisa Ling
Girl Scout alumna Lisa Ling aspired to become a journalist and that’s exactly what she did! She is an award-winning journalist covering many issues throughout the world, and she’s also hosted several television shows.

Admiral Michelle J. Howard
This Girl Scout is the prime example of a leader! She has served in the US Navy since 1982 and is the highest ranking woman in American naval history.

Mary Jackson
You may know of Mary Jackson’s story in the movie Hidden Figures. She was a mathematician and aerospace engineer for NASA, but did you also know she was a Girl Scout troop leader for over 30 years? We’re so grateful for awesome women like Mary who wasn’t afraid to pursue her dreams in science and dedicated her time to showing girls they could achieve their goals!

Wow, there’s so many amazing Girl Scout alumnae that inspire us! They are the perfect examples of courage, confidence, and character. How are you taking the lead like a G.I.R.L.? We want to share your story too! Submit your story on our website and we’ll share it on our social media.