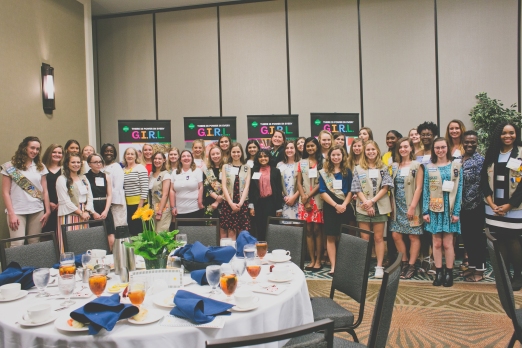 For over one hundred years, Girl Scouts have successfully answered the call to Go Gold, pursuing an award that that indelibly marks them as accomplished members of their communities and the world. The Girl Scout Gold Award, the equivalent to the Boy Scout Eagle Award, is the highest award that a Girl Scout can earn. Girls must Take Action by identifying a problem and leading others in a service project that makes a significant impact on the community. Gold Award Girl Scouts embody the purpose of the Girl Scout Movement of building girls of courage, confidence, and character who make the world a better place. They are not afraid to take risks, face challenges, and stand up for what they believe in. These young women are inspiring leaders whose Gold Award projects are impacting the worlds of STEM, education, agriculture, medicine, and more on a local, national, or global level.

Girl Scout Gold Awards are only earned by 5% of eligible Girl Scout Seniors and Ambassadors—the goal? To help every girl unleash her inner G.I.R.L. (Go-getter, Innovator, Risk-taker, Leader) to have the courage to take a lead in their communities through opportunities like going Gold. The Girl Scout Gold Award has been the best kept secret since its introduction in 1916 in that it creates powerful girl-leaders who are ready to tackle anything that comes their way—and we are ready for the secret to get out.

Why should girls Go Gold? The Girl Scout Gold Award not only makes a significant impact on the community, but on the girl. According to the Girl Scout Research Institute (GSRI), 70% of Gold Award Girl Scouts feel that they lead a purposeful and meaningful life, compared with 42% of Girl Scout alumnae who did not earn their Gold Award. Additionally, 84% feel that they have had success in leadership, compared with 64% of alumnae that did not Go Gold. So what is the secret ingredient for leadership and happiness that comes with being a Gold Award Girl Scout? The history of the award in addition to the girls who earn it and all that they accomplish to do so says it all.

Since 1916, Girl Scouts have taken on projects to improve their communities.

The best and brightest of Girl Scouts have undertaken projects to improve their communities since 1916. The Golden Eaglet was the name originally given to what would later become the Girl Scout Gold Award. Girl Scout Founder Juliette Gordon Low created the Golden Eaglet to encourage girls to shatter glass ceilings and break down barriers by making a difference in their community. Always ahead of her time, Low created this award before women had even the right to vote, and encouraged girls not to take no for an answer and to take the lead despite gender inequalities.

Though the names of this award have changed over the past one hundred years, the meaning has stayed the same. In 1980 this became the Girl Scout Gold Award, and continues to inspire girls to find the greatness inside themselves and share their ideas and passions with their communities just as it did in 1916.

To earn her Girl Scout Gold Award, a girl must identify an issue in her community, and work to make an impact in solving that issue. Girls pursue projects in a topic that they are passionate about and truly want to see change enacted. The process includes seven important steps:

In order to complete these steps, girls must step outside their comfort zone by completing tasks such as speaking to important community leaders, directing and leading adults, and creating awareness of their issue and how their project is making an impact. The Girl Scout Gold Award is more than just a community service project. It requires organizational, leadership, and networking skills. After earning their award, Gold Award Girl Scouts are seen as distinguished leaders that used their vision of change to create a community legacy with a sustainable solution to a problem.

The Impact Lasts a Lifetime

The Girl Scout Gold Award does not conclude with the completion of her project. When a girl earns her Gold Award, she is a Gold Award Girl Scout for life. The projects that girls complete for their award not only makes a lasting impact on the community, but leaves an incredible mark on the girl. From the time that a Girl Scout joins the Movement, she is part of a progressive experience that creates G.I.R.L.s (Go-getters, Innovators, Risk-taker, Leaders) through programming in areas like STEM, leadership, and outdoors, as well as service to the community. Girl Scout Gold Awards are often one of the final experiences for a Girl Scout before becoming an alum, and gives girls the perfect opportunity to channel everything that they have learned throughout their journey with Girl Scouts, whether they started as a Girl Scout Daisy in kindergarten or joined a troop in high school, into a project that makes a sustainable impact for others and highlights the impeccable leadership capabilities of the Girl Scout.

Approximately one million Girl Scouts have earned their Girl Scout Gold Award or its equivalent since 1916. These Girl Scouts represent the happiest alumni with a more positive attitude towards themselves and their success in Girl Scouts, and they tend to evaluate their success in life higher than do other Girl Scout alumnae as well as non-alumnae. The Gold Award makes an excellent addition to girls’ resumes and college applications, opens opportunities for numerous scholarships, and can even enter the military at one rank higher than other recruits.

Additionally, there are opportunities for special Girl Scout Recognitions, like the Girl Scouts of the USA National Young Women of Distinction, which recognizes 10 girls per year that went above and beyond on the Take Action Project and demonstrated extraordinary leadership and accomplished measurable and sustainable impact. Just last year, one of Girl Scouts—North Carolina Coastal Pine’s own Gold Award Girl Scouts, Sadhana Anantha, received the national recognition for creating a simulation activity to educate pre-teens about tests used to identify diseases such as Ebola. Sadhana channeled her strengths in STEM with her passion for making a difference, and created a project that will inform and inspire others so that they too can make an impact.

Gold Award Girl Scouts graduate from the Girl Scout program with the ability to tackle an issue like no other, and a hunger for making a difference. These are the girls that become the women that change the world.

Girl Scouts like the 2018 National Gold Award Girl Scouts will continue to defy expectations and act as outstanding change-makers, and we look forward to celebrating their achievements.

Interested in being the next Gold Award Girl Scout? Join the Movement by becoming a Girl Scout with Girl Scouts—North Carolina Coastal Pines. Members of the community can join us in building these strong female leaders by volunteering or becoming a donor. Visit http://www.nccoastalpines.org/ for more information.