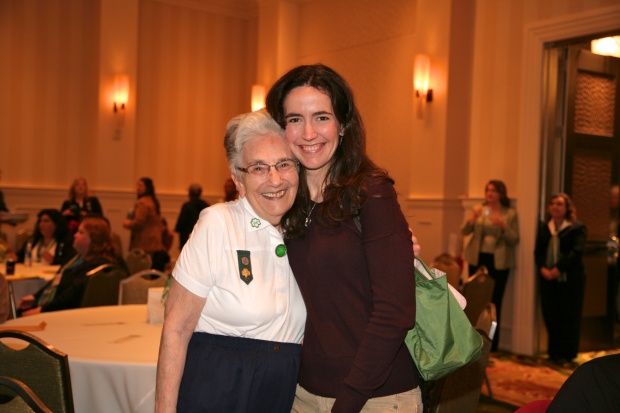 In Girl Scouts, we speak frequently about telling our stories. We share our individual experiences to connect with others, to make our voices heard, possibly even to leave a little something of ourselves behind. Whatever the reason our stories, especially our Girl Scout stories, do much to forge a bond of sisterhood that will endure for many years to come.

One day recently an envelope landed on my desk brimming with such stories. With a cover letter addressed to me, it was signed, “Your Green Sister, Lofi.” For those who have not yet met her, Lois “Lofi” Hirschman, walked up to the stage at our 2012 Annual Meeting to receive her 75-year numeral guard. She is a long time member of Girl Scouts – NC Coastal Pines and her story was recently featured in our council’s 100th Anniversary History exhibit.

In this packet she had included a number of her favorite Girl Scout tales, a personal history of one volunteer’s dedication to the ideals of our founder Juliette Gordon Low. She hoped by telling her stories that she might pass along to others the benefit of her experience: the good, the silly – all the ups and downs of exploring the world as a Girl Scout.  This packet contained some real gems.  I couldn’t help but laugh as I could almost hear her in my head telling these great tales!

The first story in the packet was one of the good and silly. When our legacy council celebrated the 80th anniversary of Girl Scouting, there was a huge birthday party held at the fairgrounds in Raleigh, with Kay Yow, the late and reknown NCSU Women’s Basketball coach and breast cancer advocate, as the main speaker. Each troop was required to bake a plain square cake that would be combined to form one huge, towering white cake to serve about a thousand people.  Winn-Dixie donated enough white frosting to cover the huge cake, only the massive confection refused to hold together despite the valiant efforts of the two patrols assembling it.

“Icing was flying everywhere,” Lofi wrote.  “Soon the leaders resembled a bunch of icing-covered hamsters scurrying round and round the cake as fast and with as little direction as a hamster in an exercise wheel.” Lofi went on to describe how it became a race between Kay Yow and the guardians of the birthday cake, who fought to keep it from toppling before the end of her speech.  “The battle raged.  Kay talked, the guests were entranced and the cake swayed.”

Detailing the importance of thorough preparation and reading instructions, her second story shared her attempt to introduce some world culture to day camp by cooking fried rice for sixty people. To which Lofi added the following advice:  “PLAN B, if anyone asks why we were using Minute Rice instead of long grained rice, I’d answer, ‘This is GIRL SCOUT Fried Rice!’ But how could I cook all that rice with just a small Dutch oven and a 4-quart saucepan?  My PLAN B needed a PLAN B!”

Her ”How I Earned the Fly By the Seat of Your Pants Badge” story related the adventures of a troop trip to New York City.  Lofi outlined the badge requirements as she told a vivid tale of what we in Girl Scout land like to call “Making It Work.” Using all her available resources, she navigated 32 girls around the city in a rainstorm.  As she settled into her seat on the bus at the end of the fateful journey, “I silently presented myself with my badge, closed my eyes and listened to the girls reviewing the ‘fun’ they had that day and talking about the needlecraft badge they were going to do this spring.”

As we celebrate Volunteer Appreciation Week, there’s no better time to gather these important slices of Girl Scout life.  Have a story of your own to share?  Share it with us via our Story Submissions form.