Lofi Hirschman was a lifelong Girl Scout and difference-maker that embodied the Girl Scout Promise and all the overall ideas of our Movement. She was everything a Girl Scout should be – courageous, confident, and strong with a spark of energy, advocacy and passion for helping others.

Lofi joined Girl Scouts when she was just 10 years old. Growing up with a learning disability, Lofi found it difficult to fit in. But after joining Girl Scouts, she found sense of belonging in a judgement-free zone where she fully embraced the Girl Scout Promise and Law for 80+ years. Lofi led her life by Juliette “Daisy” Gordon Low’s story, Girl Scout’s founder, who she deeply identified with. Lofi believed that Daisy had experienced similar battles as she had when she was younger and that by focusing on her strengths, she could push forward to accomplish her goals just like Daisy did.

Throughout the years, Lofi continued her passion for Girl Scouts by serving several roles including a service unit director, volunteer trainer, a member of the board, and a troop leader. As a troop leader, Lofi was an advocate for diversity among the girls in her troop – whether that was ethnicity, age, or religion. She was a strong believer that all girls should learn from each other and that this would help them better understand others’ perspectives and cultures. She was also involved internationally with the World Association of Girl Guides.

Lofi made an impact not only on the girls she served, but to their families, other volunteers, and the council. See below for the stories of those that she touched and learn more about why she meant so much to our Movement. 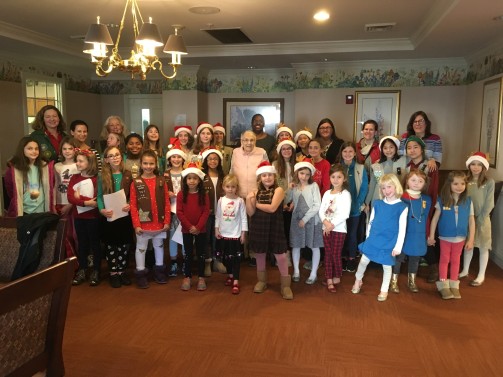 “Lofi Hirshman was a woman that truly walked what she believed. She believed that all girls should be a part of Girl Scouts and would try to recruit them whenever she had the opportunity. Ms. Lofi would attend Girl Scout events dressed as Juliette Gordon Low. She would tell stories to girls and adults that would draw you in and you would hang on her every word. She knew all things Girl Scouts. She could give the history on any song, event, and location.  Ms. Lofi was a well-traveled woman that was willing to share her adventures. Over the years, I got to know and love Ms. Lofi. She was always willing to attend Girl Scout events and troop meetings to stay involved with girls. As she became more seasoned and did not travel as much, she allowed me to bring Orange County Girl Scouts to the Cedars to sing holiday carols with the residents. This is where she did her last candle lighting ceremony with Girl Scouts. At her birthday luncheon, several years ago, I told her that I would see her in December for holiday carols and she told me that she would not be around for that event to take place. I told her that I would see her in December. In December, Orange County Girl Scouts were back singing holiday carols. We had the same previous discussion again and each December, we were back Caroling with Ms. Lofi. I am so blessed that I was able to carol with Ms. Lofi in December and enjoy her calming presence and amazing spirit.  Martha Webb said, “Lofi took a promise and engraved it upon her heart”.  I now know that Ms. Lofi is truly a Green Angel.” 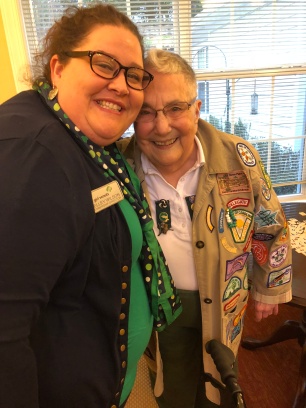 “Lofi was an amazing person. I think I probably liked her as much as she liked peach or butter pecan ice cream (she liked for me to pick one of these up for her when I came to visit). She was one of the strongest and kindest people I have ever met. She was true to herself and the Girl Scouts and loved all of her Girl Scout sisters. One of the most important things Lofi wanted to pass along to leaders would be for them to be a “Lettie” leader.  What she meant by this was for leaders to let the girls lead, decide their interest and grow in the process. Lofi challenged me to want to be a better person and the best Girl Scout I could be. I am grateful and blessed to have met her and share the time I had with her.” 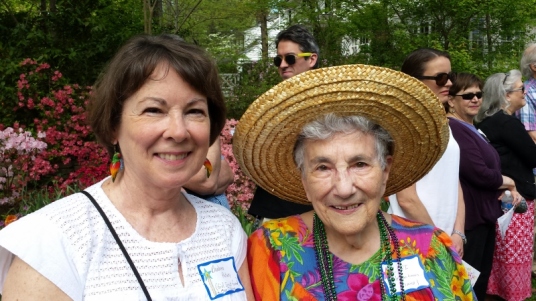 “I knew of Lofi years before she moved to Chapel Hill.  She was always so vocal at our council’s annual meetings, especially during our realignment.  I was friends with her daughter Heidi from our PTA days and loved seeing Heidi at Leaderee with her mom.  I guess that was when I first was aware of Lofi.  Then she moved from Raleigh to Chapel Hill to the same retirement community where my mom lived.  I immediately got Lofi involved with Orange County GS’s 100th anniversary committee and she was a font of ideas from her wealth of knowledge of “all Girl Scout experiences”.  We had an exceptional event in 2012 with Durham County Girl Scouts, using quite a bit of Lofi’s experiences in designing a large event.  Lofi continued to be engaged with troops in her new county:  dressing up as Juliette Low and not only designing a workshop for Daisies at our yearly County Camporee, but also visiting individual troops, including my own.  I ended up driving her to our monthly service unit meetings (because I knew where she lived!) and she would regale me with her endless tales of her experiences as a Girl Scout leader during those drives.  She eventually gave me a printed copy of her short stories and it is one of my treasured Girl Scout possessions.  She stands as someone whom Girl Scouts gave so much personal meaning and purpose, regardless of whatever difficulties life gives one.” 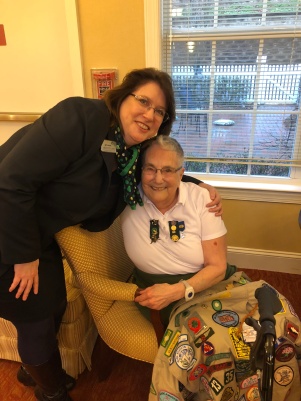 “I met Lofi early in my time with the Council while answering phones at the front desk. She always had great stories and I told her she ought to write them down, which she was already doing. Later, when I saw her at the Annual Meeting, I asked her to send me some stories. One day an envelope arrived for me packed with several of them. They were all hilarious and totally relatable to my own Girl Scout journey.

I still tell people that my favorite earned award is Lofi’s “Flying by The Seat of My Pants Badge.” It pops into my awareness every time I try something new, and gives me the little extra push I might need at the time. This is just one example of the impact Lofi had on everyone she met, and it’s why I can’t help but smile at the thought of her.” 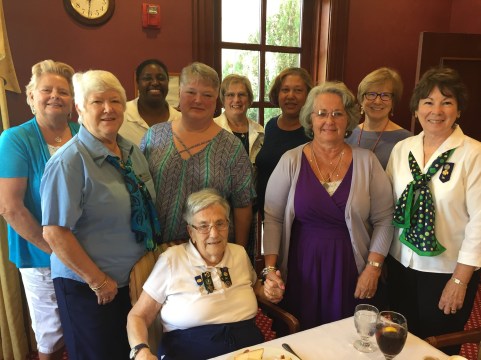 “I met Lofi over 35 years ago. I was a new trainer and Brownie troop leader.  Within in a couple of years, I moved from Raleigh to Wake Forest and took on the role of Service Unit Manager. Lofi was the Area Manager and my service unit fell under that area. It was then that I began to know and appreciate Lofi as a Girl Scout sister, mentor, and friend.

My 1st challenge as Service Unit Manager was to build the Girl Scout presence in Wake Forest/Rolesville. At the time there was one new leader and several interested girls. Lofi and Pam Northup (Field Director) assist with an event at the Wake Forest community center.  By the end of the event, there were thirteen new volunteers and lots of girls ready to join a troop.  Lofi was with me the entire journey. That meant orientation for 13 new leaders, placing girls into troops, assisting with meeting places, and more. My confidence and leadership skills were greatly improved as Lofi guided but allowed me to do it myself. She was there to help with the training and struggles that came with my position.  Those early years were busy and taxing but Lofi made them fun too.

Eventually, we became training partners. We were a good team and complemented each other well. Our styles were different, and it worked for us. She would often say that I kept her in check. It worked both ways. Lofi was a dedicated Girl Scout and believer in the girls given the opportunity to experience and grow.

One training that stands out to me was one based on the Sensitive Issues booklets. Lofi’s genuine caring and sharing her life and family challenges help us open leaders’ minds and hearts. I felt privileged that leaders we just met were open with us about their lives and challenges. During those trainings, we all grew closer together as Girl Scout sisters and understanding the world that the girls were a part. Embracing one of Lofi’s guiding principles – “Sister to all Girl Scouts”.

She never had harsh words for others, she instead focused on the positive.  “Those are the ones that you hug twice” is a statement she would make at all new leader trainings referring to times when leaders would struggle to connect with a girl (or adult).  What she didn’t say, but I later realized is that the hug will melt down the barrier.  Again, this reflects her spirit and how she was able to affect so many people in and out of Girl Scouts over her life.

Our lives not only intertwined because of Girl Scouts but as sisters.  I am forever grateful that Lofi entered my life and stayed over 30 years. I could not ask for a better sister.” 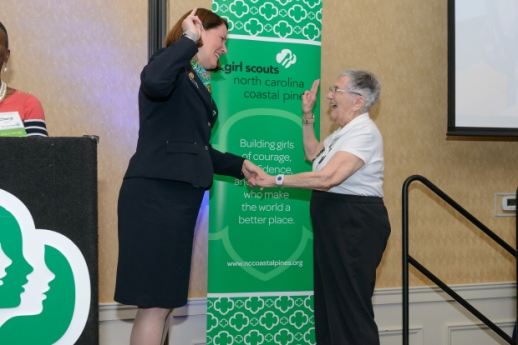 “This has been a rough past year for my family. I had a dream last night about Lofi. I was outside with my family and this large bear came in the yard and said, “Be Strong”. The voice was Lofi’s, and then she said go make SWAPs.   I don’t know what the dream meant but I’ll try do what she said. Be strong. I have always felt that Lofi was a strong woman and I admired her. I am so glad I got to know what a wonderful woman Lofi was.” 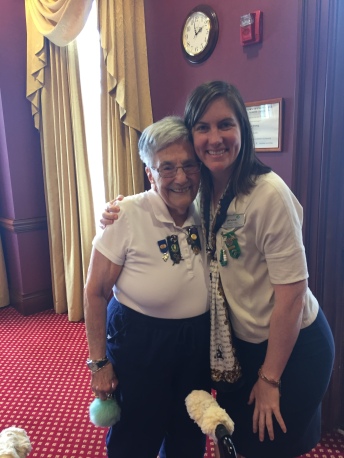 “Lofi was one of the first Girl Scouts I met when I joined Girl Scouts – NCCP as staff member. She instantly charmed me with her inclusive smile, fascinating stories, and inexhaustible knowledge of and love for Girl Scouts. One of my favorite things Lofi shared with me during our short five years of friendship: She wanted Girl Scouts to look in the mirror each evening and think of two things: 1) one thing that they did for someone else and 2) one thing that someone else did for them. I think this perfectly sums up how Lofi lived her life: creating an infinity loop of good deeds, making the world a better place, thinking of others, and knowing that she could make a difference to one person — and thus, she was making a difference in the world. She will be missed, but her good deeds will live forever in us.” 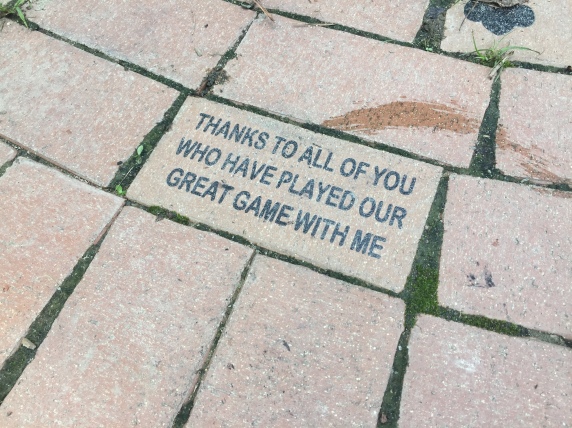 Lois “Lofi” Hirschman of Chapel Hill passed away on Friday, January 11, after battling cancer. Her advocacy and passion for the girl-led movement has left a mark that we will always remember. You can read her full obituary online. She will be missed by all of her Girl Scout sisters.